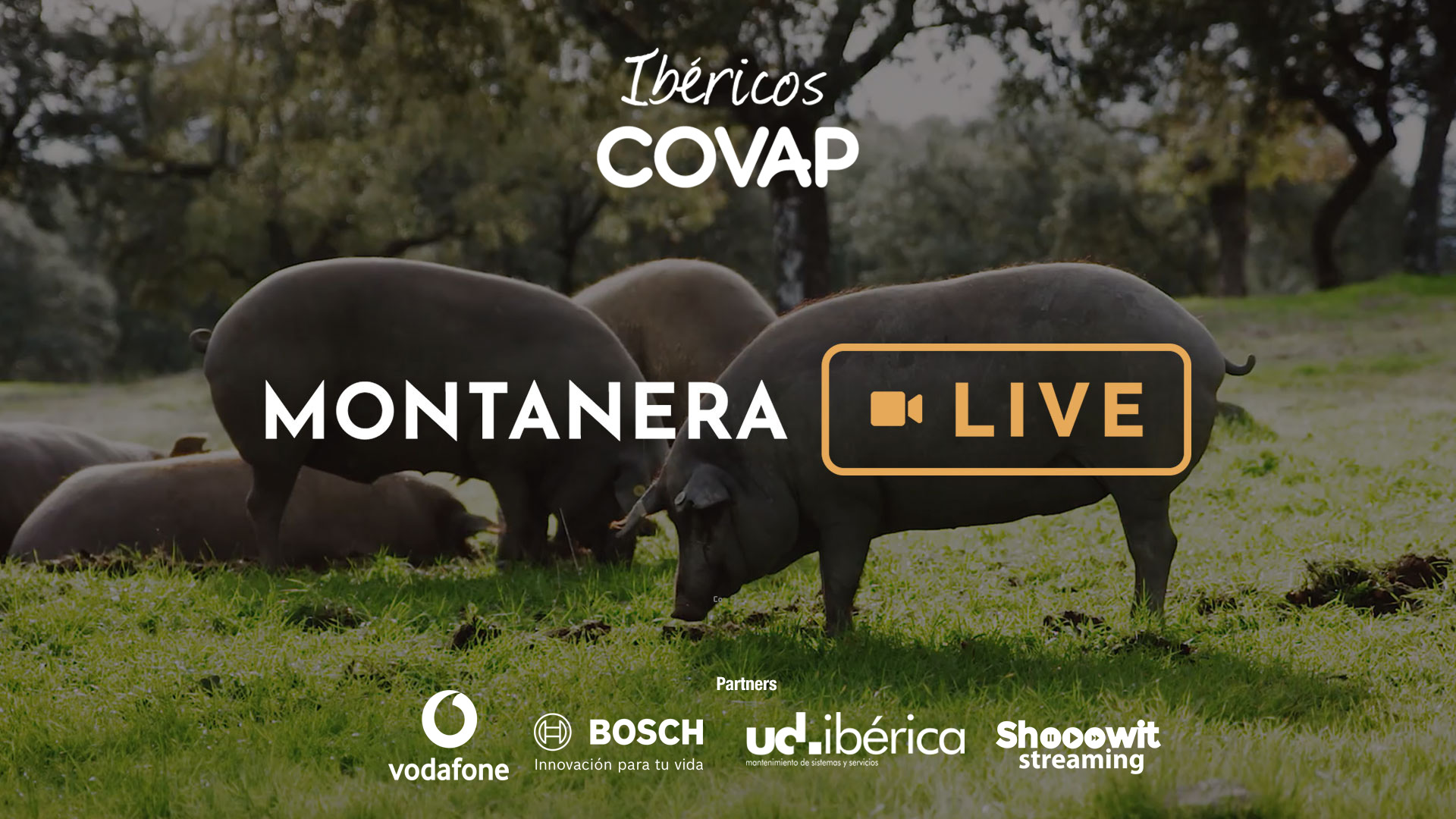 Bosch, UD Ibérica, and Shooowit were the companies that collaborated on this novel initiative, which represents one more Cooperative commitment in the world of digitalization and constitutes a step forward in its commitment to the traceability and transparency of COVAP's acorn-fed, 100% Ibérico products.

From now and until the end of February, the website www.ibericoscovap.com will include the broadcasting of a live stream showing the raising of the 100% Ibérico pigs roaming free during the "montanera” - the time of year during which the Ibérico pig feeds solely on the acorns that fall from the holm oak trees, and which normally runs from November until February - thanks to the installation of latest generation technology and a powerful 4G connection provided by Vodafone on one of its farmers' estates right in the Valle de los Pedroches.

The "montanera", a unique time of year that runs from November to February, when the acorns, the fruit of the holm oak tree, fall, is the last phase of the raising of the 100% Ibérico pig. This animal roams free in a privileged setting, the Valle de los Pedroches, considered the largest holm oak grove in the world with over 300,000 hectares of dehesa full of thousand-year-old holm oaks. Now, this magical event will be shown to the world through streaming (24/7) thanks to the Montanera LIVE initiative created by COVAP Ibéricos and Vodafone, a leading European telecommunications operator.

The initiative will broadcast the free roaming of the 100% Ibérico pig minute by minute from one of the farmers' estates right in the Valle de los Pedroches through the Montanera LIVE section of www.ibericoscovap.com website. This is a pioneering project that has been possible thanks to the impressive deployment of 4G connection systems carried out by Vodafone Spain and three other technological partners: Bosch, charged with supplying five cameras with starlight for night vision with scarcely any light, artificial vision at the source (edge computing) for greater image quality and precision, and trainer camera technology to detect situations of greater interest to viewers, in addition to offering data security and smart Internet management; UD Ibérica, a specialist in the integration of smart city solutions and IoT in both the industrial and farming worlds, which was charged with implementing a solution using the Bosch camera equipment and applying Vodafone connectivity solutions; and Shooowit, the platform charged with offering the video streaming system.

You can watch the "montanera" 24 hours a day from Spain, Europe, China, and the United States through the web platforms of COVAP Ibéricos in each country.

COMMITMENT TO INNOVATION AND TRANSPARENCY

Cooperativa Ganadera del Valle de Los Pedroches (COVAP) was founded 60 years ago by a group of farmers united by various common goals, which included the conservation of the privileged ecosystem of the Valle de los Pedroches dehesa and contributing to the economic and social development of the region.

The "Montanera Live" project, COVAP assures us, is an initiative created for the sole purpose of showing consumers the transparency of its acorn-fed 100% Ibérico pork products from the source and the Cooperative's faithful commitment to the environment, food safety, and traceability throughout the chain.

This pioneering project puts COVAP one step ahead thanks to this strong commitment to innovation and digitalization in its sustainable food production model.