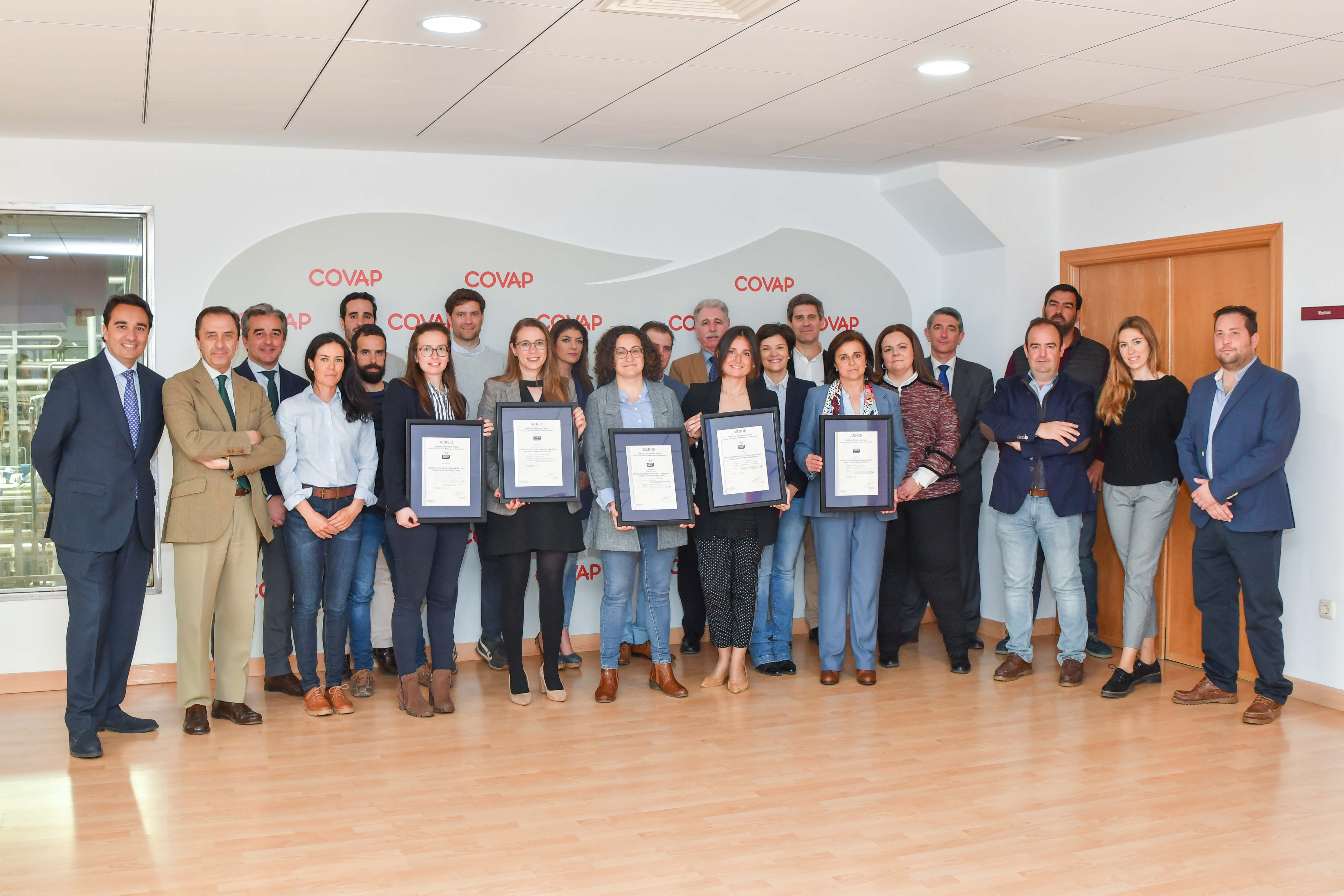 COVAP now boasts the AENOR Animal Welfare certification for its dairy and pig farms, its facilities for the classification of cattle and sheep, and its meat-processing facility. The certification applies to all of the Cooperative's livestock production processes and represents official recognition of COVAP’s model, which is based on ensuring quality from the point of origin onwards.

The AENOR Animal Welfare certificate is based on the European Welfare Quality® benchmark and was awarded following an assessment of COVAP's good practices in livestock farming. The assessment sought to verify that the animals were well-fed, well-housed, were in good health, and behaved appropriately, and was conducted across the Cooperative's 305 dairy farms and 576 100% Iberico pig farms.

Antonio Pérez Carreño, the director of AENOR Andalusia, visited COVAP to hand over the certificates to the managers, technicians and livestock farmers in the different areas that took part in this major animal welfare project. The awarding of this certification recognizes the good practices in livestock farming that the Cooperative has followed for decades. It also represents a validation of COVAP’s mission to offer high-quality products from the point of origin onwards.

Also present for the handing-over of the certificates was Ricardo Delgado Vizcaíno, COVAP's Chairman, who accompanied Pérez Carreño throughout the day. After handing over the certificates, the director of AENOR Andalusia was given a tour of the dairy facilities, where he was able to observe all of the processes involved in the production and packaging of COVAP’s dairy products.

In the words of Ricardo Delgado Vizcaíno: “For decades, livestock farming has been our way of life, and a way of life for the thousands of families who make up the Cooperative. Therefore, no one has a greater concern for animal welfare than us; we have equipped our farms to ensure optimum levels of animal welfare and have provided our farmers with ample education and training in the subject. Our efforts have now been validated and accredited by AENOR, an organization of the utmost professionalism and rigor.”

Pérez Carreño was also able to visit a dairy farm accompanied by one of COVAP’s livestock farmers, where he witnessed first-hand the firm commitment on the part of the Cooperative, its members and MERCADONA to developing strategies that improve animal welfare while responding to consumer demands.

The director of AENOR Andalusia affirmed that “this certification demonstrates COVAP’s concern for animal welfare and recognizes its longstanding commitment to good practices in livestock farming, in line with the values of modern society and the demands of today’s consumers. Moreover, there is a direct correlation with the quality of the end product, given that meat and dairy products from animals with a better standard of welfare are of higher quality.”

AENOR Animal Welfare certification validates organizations’ compliance with the requirements of the AENOR Animal Welfare model, which is based on the European Welfare Quality® benchmark, one of the most important standards in animal welfare. This benchmark was drawn up in its entirety by scientific experts specializing in animal welfare, from technology centers in a range of different countries. The benchmark stands out for its scientific rigor and for the fact that its audits are based on direct observation of the animals being assessed. AENOR’s auditors are authorized and verified by the Welfare Quality® platform.

In order for the certification to be granted, AENOR (Spain’s leading certification body) conducted a thorough audit based on assessing four key principles: that the animals are well-fed, well-housed, are in good health, and behave appropriately with regard to the needs of the species in question. These requirements are further broken down into 12 criteria, which include an absence of pain when handled, an absence of injuries or disease, guaranteed freedom of movement, and adequate behavior on the part of the animals.