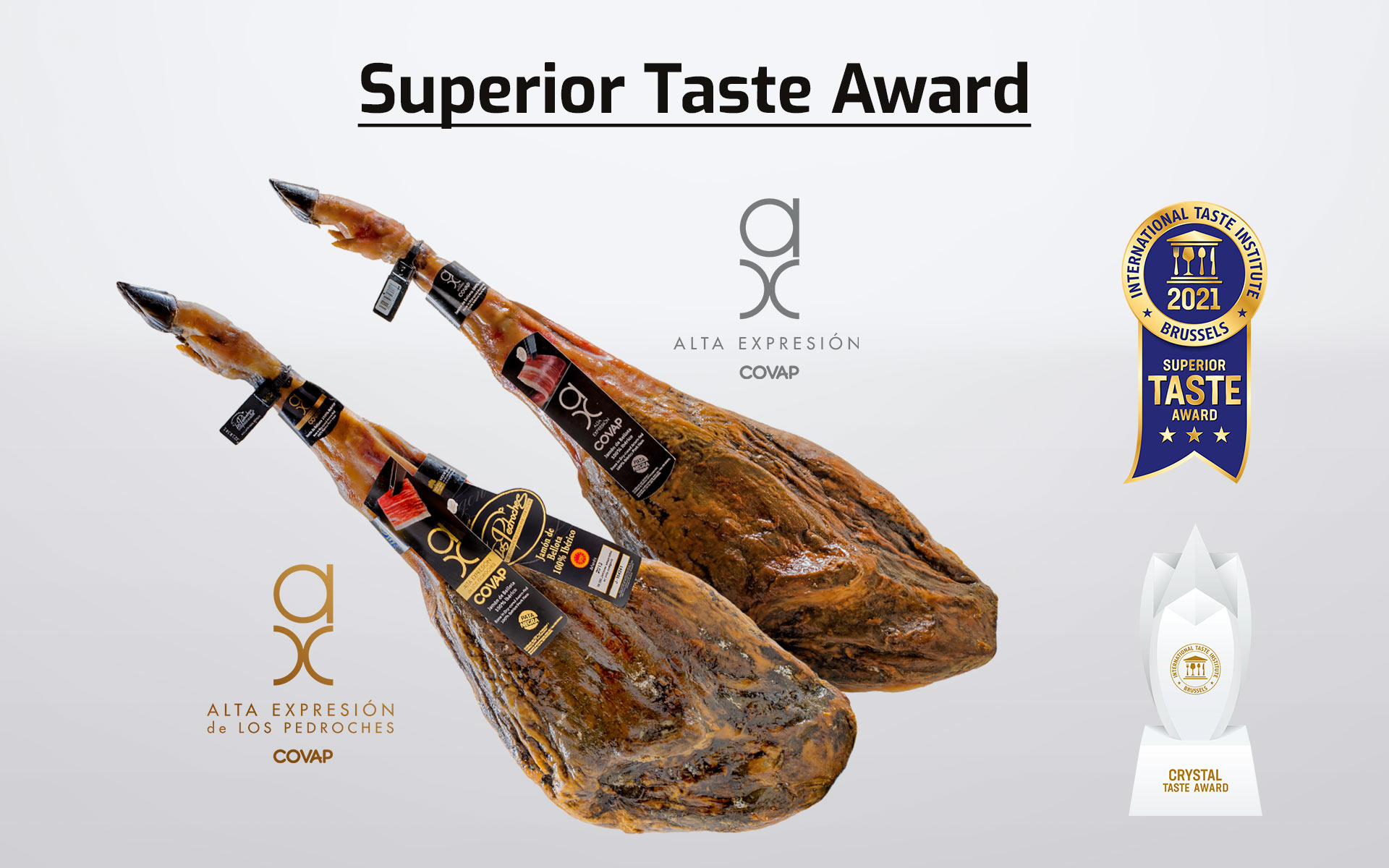 The prestigious International Taste Institute has once again awarded the Cooperative the recognized Superior Taste Award certification to a total of 2,218 products, including 145 prizewinning Spanish companies.

The Institute's jury of chefs and sommeliers evaluated the taste of food and drinks in a blind tasting with rigorous sensory analysis of the organoleptic properties of each product. This year there was also a significant increase of 17% in both total participation and that of Spanish companies related to health, sustainability and sugar-free products.

The COVAP Alta Expresión 100% acorn-fed Ibérico ham won the Crystal Taste Award, a prestigious award that recognizes products awarded with three gold stars for three consecutive years. It is one of the 39 winners from around the world and one of the nine Spanish products that obtained this award in 2021.

The flavor, aroma and careful presentation of the product were the most outstanding qualities, earning a score of 95%, a higher valuation than in previous years, demonstrating the firm commitment and know-how of the Cooperative's breeders and ham masters.

The bone-in dry-cured 100% acorn-fed Alta Expresión de los Pedroches Ibérico ham also won the highest three-star award, with the jury highlighting its flavor as one of the most appreciated qualities.

This recognition highlights not only the Cooperative's 360º traceability model but also its commitment to producing safe, sustainable and quality products.

About the Superior Taste Award

Founded in 2005 and located in Brussels, the International Taste Institute analyzes and evaluates the taste of food and drinks from around the world. The jury is made up of 200 renowned chefs and sommeliers from 15 European culinary and sommelier associations and organizations. Over the years, more than 18,000 products have been certified by the Taste Institute jury, which includes prestigious chefs and sommeliers such as Ferran Centelles (Sommelier Chef at the El Bulli Foundation), Manuel Jiménez (Best Sommelier in Spain 2017), Alain Nonnet (the holder of two Michelin Stars for 36 years), Gaetano Raguni (2017 Italian Bocuse d'Or Winner), Alan Coxon (British Food and Drink Ambassador and presenter on BBC TV Chef) and Cristina Figueira (the holder of one Michelin Star). The Taste Institute conducts objective sensory evaluations – the jury follows a rigorous blind tasting methodology in which product samples are anonymous to avoid any scoring bias. In addition to scoring the various organoleptic criteria analyzed, the jury provides detailed comments and suggestions to improve products, answers to questions and queries from producers about their products and pairing suggestions. For further information about the Superior Taste Awards visit.